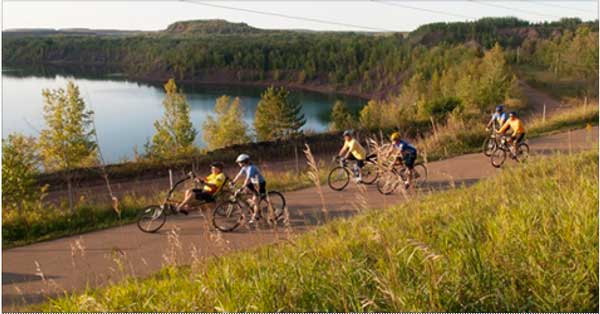 Minnesota Department of Transportation is in the planning stages of US Bicycle Route 41 which will go from St. Paul, through Duluth, and up to the Canadian border.

The following information is from the Minnesota Department of Transportation web site.

Help us plan the new route

Thank you for your input!

In June 2016 you shared your input on the draft route, ranking route evaluation criteria, map type, map characteristics, route name and the type of bicycling you engage in most.

Through four open houses, an online survey, and an online mapping tool, a total of 2,746 people provided feedback, 77 at open houses and 2,669 through the online engagement tools. The four open houses were held in communities along the draft U.S. Bicycle Route 41, including White Bear Lake, Hinckley, Duluth and Tofte. The majority of online respondents were from the Twin Cities area, although respondents represented many communities along the entire project route.

Here’s the revised route (PDF), which is changed to include comments received in June. See the summary report (PDF) for more information on what we learned from you so far.

Choose the final name and connections

MnDOT and project partners are hosting a second round of open houses and online engagement, which will kick off in early August. We would like your input on choosing the final name for the route and identifying your preferred bicycle route connections between Minnesota and Wisconsin.

Join us at one of our open houses:

If not attending an open house, take our new survey, available through August 17:

After the August public engagement, the project team will finalize the route alignment, tally the votes to determine the final route name, and begin working on the American Association of State Highway and Transportation Officials application for official U.S. Bicycle Route designation. MnDOT anticipates the route will receive designation in fall 2016.

This message is only visible to admins.